FrostWire utilizes torrents to accomplish peer to peer file sharing. There seems to be a lot of confusion on what a torrent is and how it is used.

First, let’s consider how files are organized and accessed. Any file can be considered as a string of bytes, starting at one and going to the end of the file. In most files systems, data can be read and written to a specific point in the file by using the character number, which can be expressed in many ways, but that’s not your problem. If you want character 10, ask the file system to give you character 10, and you don’t care how that happened.

You can think of torrents as two basic types: File torrents and Folder torrents. A file torrent names one file and only one file. If you wanted to obtain an album of 20 songs, you’d have to use 20 different torrents, if you used file torrents.

A folder torrent describes all of the data in a folder, which can include sub-folders. If an album of 20 songs is contained in one folder, that one torrent will allow you to obtain that entire album. Some torrents can contain a primary folder containing sub-folders, each containing many files. Torrents containing over a thousand files are NOT uncommon.

Even with a folder torrent, there is provision to select specific files and exclude others from the download process. This can vary from program to program. For FrostWire, its fairly easy and covered in many help articles.

The key is that a torrent is NOT the data that you want. It is a description of the data you want. Torrents are created by torrent programs. They organized the data into chunks and provide a data map of the file structure, based on those chunks, so that data matching the torrent description can be read and written, randomly, from the disk.

Because the data can be read and written randomly you can send to and receive from multiple people at one time. This means that the data describe by a torrent MUST be and remain unchanged on the disk, once the torrent is made. If the data is changed, it will invalidate the torrent and cause errors, which the system will catch and attempt to deal with, usually by disabling the offending torrent.

Each torrent can be identified by a unique hash total of the data layout. The hash description is not so large as to be difficult to handle, but is large enough to make generation of the same hash from different data almost impossible.

The hash is considered a unique identifier for each torrent and is the mechanism that torrent programs use to exchange information about who has what torrent.

Here are some facts.
A torrent contains NO data from the files it describes. It only contains a mapping of the way the data is organized on disk.

A torrent has NO information about who has the file described. If someone decides to share files from a torrent, the torrent program will advertise the hash, and those looking for that file will be so informed.

Thanks to our jlibtorrent library, a multitude of crash reports sent by you and a lot of personal feedback loops, our developer team has managed to produce the most stable FrostWire for Android release so far.

We’ll always have crashes, but our quality has improved dramatically with the jlibtorrent library. As you can see the graphic below, during these last weeks even though we have more users using the app daily the number of crashes reported has been kept to a minimum and every day we fix the new crashes that come in.

The new FrostWire for Desktop release is available for download. On this release we updated the libtorrent/jlibtorrent and made updates to that fixed recent issues with YouTube search.

We fixes a lot of issues like the some torrent settings not being applied correctly, the TorLock search and the YouTube search. So now you will not have any problems searching for content on FrostWire.

Also, the search source processing is faster, because we did a totally new search engine.

FrostWire, a BitTorrent Client & YouTube Downloader that makes it easier to search, download, play and share content from the BitTorrent network & cloud sources, all in one place, announced today its new ‘preview’ and ‘play as you download’ capabilities for Android phones and tablets. The new preview feature not just enables users with a more convenient way to find and discover content, it makes downloading optional in some cases.

Lots of fixes under the hood for this release, we’ve also made sure this release was compatible with Windows 10 (but if you have any issues on Windows 10 please let us know).

Substantial changes on the way our bittorrent engine works, which allowed us to simplify seeding settings, and the no more the possibility of file parts staying in your download directory when you didn’t want this.

Users who had issues with external drives to save downloaded files should be glad with this release.

Soundcloud search & download has been restored with Soundcloud’s API updates. 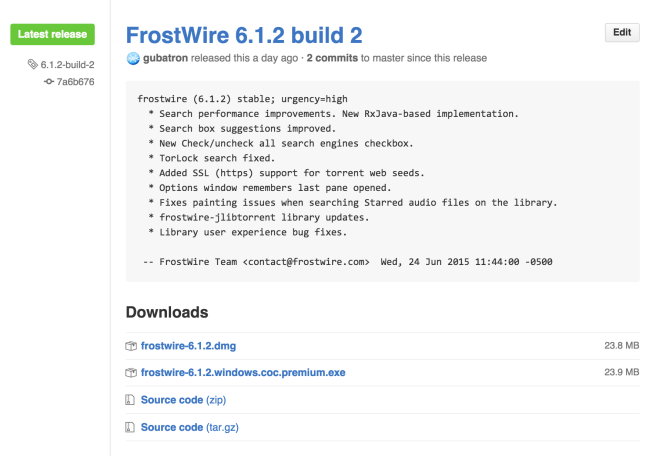 FrostWire 1.5.8 – JUNE/16/2015
– Search performance improvements.
– Issues where subsequent searches would stop working fixed.
– TorLock search fixed.
– Added SSL (https) support for torrent web seeds.
– Icons/graphics update.
– New ‘Rate us’ reminder notification.
– WiFi sharing functionality removed. Less than 0.2% of the user
base making use of this, despite multiple rewrites we never
managed to get it to work 100% of the time.
– frostwire-jlibtorrent library updates.

We’ve just pushed upgrades to the frostwire-jlibtorrent API that will allow developers to extend and interact the Bittorrent protocol at a lower level through the implementation of libtorrent plugins.

Before today, a libtorrent plugin developer had to code plugins in C++ and rebuild the libtorrent library binaries for the architectures on which the plugin was meant to be used.

We think that non-bittorrent higher level abstractions (e.g. Bitcoin+Bittorrent integration) that need to occur near the core of the bittorrent protocol can be more easily coded, tested and debugged in a language like Java, without having to touch nor recompile the libtorrent libraries.

Today we’ve made available a new portion of the frostwire-jlibtorrent API that allows you to do this without all the C++ development headaches, you just focus on your plugin logic, and your code will also be available in all platforms with the same .class files.

To create a Plugin all you need to do is extend the AbstractPlugin class, whose newTorrent method will ask you to provide a TorrentPlugin interface implementation, this is meant to be a plugin instance that takes care of what happens when a torrent is added to the libtorrent session.

We provide an AbstractTorrentPlugin class for you to extend and as you do this you may or may not need to provide your own implementation of the TorrentPlugin::newPeerConnection method, which is meant to return a PeerPlugin, a plugin instance that takes care of what happens for every Peer connection, where probably most of your plugin logic will occur. We also provide an AbstractPeerPlugin implementation that you can extend. 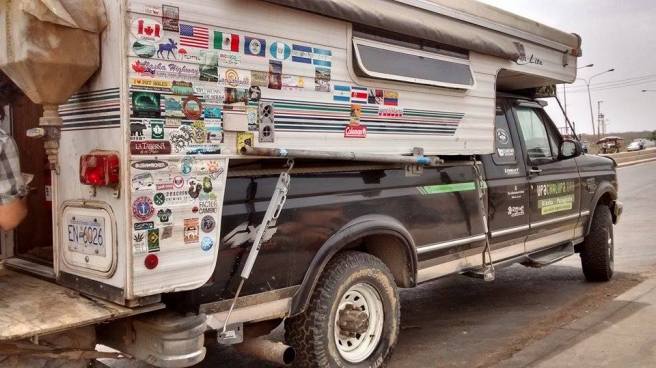 These Chilean folks are traveling all across America, this picture was taken in Colombia near the Venezuelan border.

Get your FrostWire stickers and help spread the word, the more people connected, the better it works.

We’ve now made it so that individual search results out of torrents come to you a lot faster than before, all the while using significantly less connections to the DHT.

This translates in faster search experience, more search results, and torrents being fetched and started faster than before.

These and lots of other stability and experience fixes make the new FrostWire 6.0.8 the best version ever, now with Preview while you download. 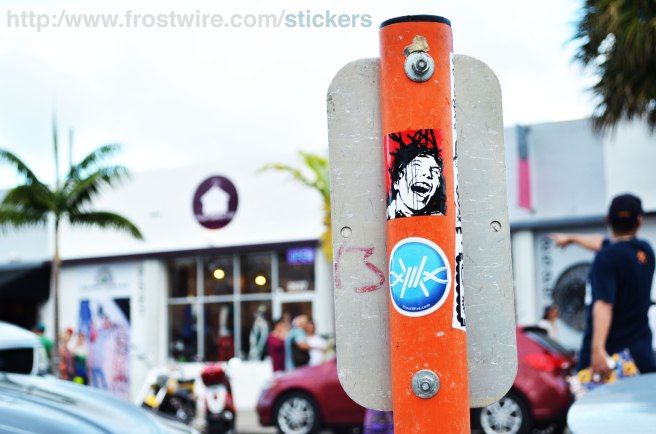 After we had to remove YouTube search from the FrostWire version distributed on Google Play, aka “FrostWire Basic”, we heard your complains loud and clear.

As a first solution, we created a “FrostWire Plus” distribution that has all the features you were used to and we made it available on our website.

For those users that simply won’t bother to get out of Google Play to get an app we had to make things better with respect to torrent search, FrostWire 1.5.2 is a first step on that direction.

FrostWire Basic users should feel a big difference when searching once they upgrade to 1.5.2.

In the past, as you searched, FrostWire would make very intensive use of your network resources, it’d try to query the DHT for every candidate torrent, download the torrent, parse the torrent and apply matching heuristics to show you relevant search results.

As of 1.5.2 we’ve started searching for more information about the torrents contents right from the search sources search results, this means, in some instances almost immediate individual files appearing on search results and much needed freeing the DHT network of millions of searches a day.

As a result to your experience, not only you get faster search results, but when you start a download it will take less to get started as FrostWire is not busy talking to hundreds of peers on the network. 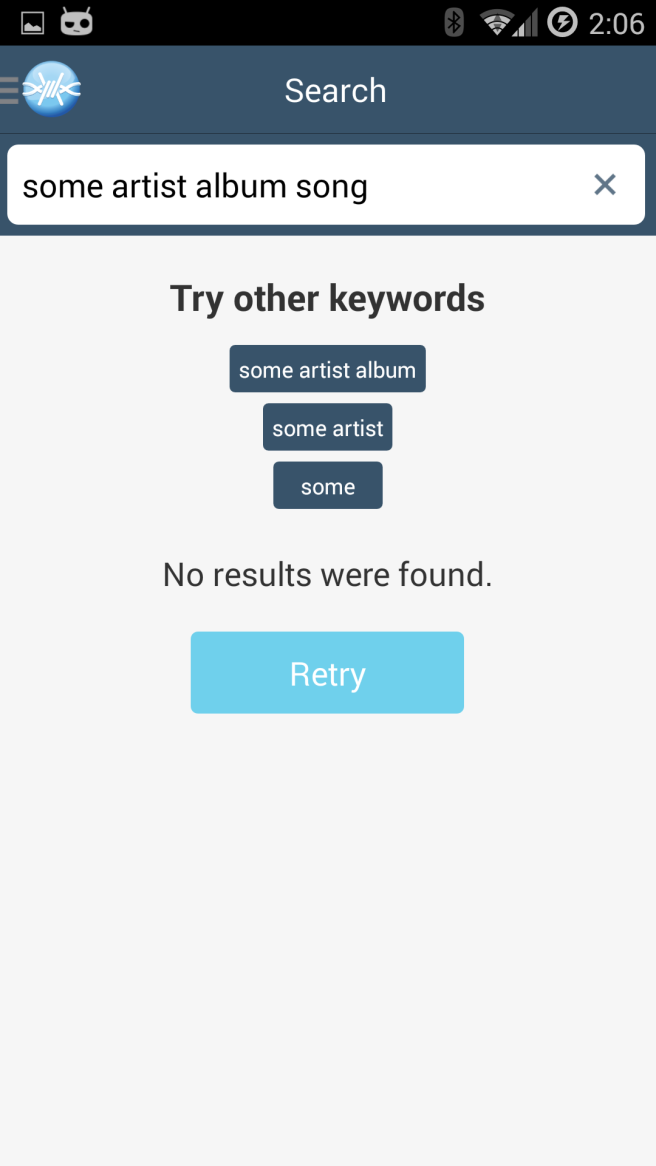 Also we’ve included some user interface upgrades that can help make your search more streamlined in case you’re not finding what you’re looking for. FrostWire will now show you search suggestions based on what you’ve entered, basically showing you reduced versions of your previous search, so you don’t have to manually delete words, now you can just push a button to try an alternate more general search which will increase your chances of finding relevant content.