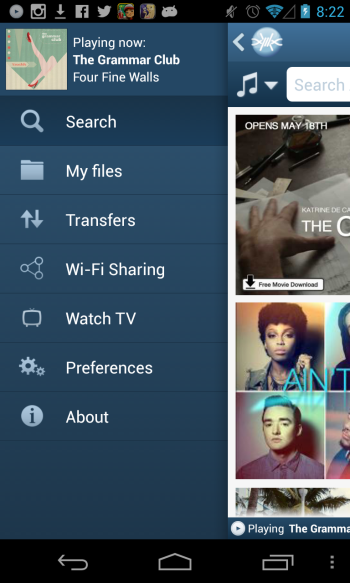 A new FrostWire for Android is out on Google Play.

In this release we improved our search algorithm to include relevant search results that were being hidden in previous versions.

We’ve also made use of Square’s Picasso Image loading/caching library for displaying all the images on the user interface, resulting in less crashes due to out of memory errors we kept receiving. Now when browsing your Audio files you will be able to see the cover art of the track, making music browsing a lot friendlier.

We’ve removed ad display from the player window, no more admob ads, instead we’ll rely on the support of the community and we’ve placed a donation control which you can always turn off on the application settings.

We’ve added a new navigation menu called “Watch TV” which will either launch or take you to the android market so that you try our new app “FrostWire TV   ” to watch live TV channels (and a huge library of video on demand content). This app is still in beta testing period, we’d love for you to give it a try and give us as much feedback as you can. We’ll reveal more details about our Live TV initiatives and new partnerships on an upcoming press release. As an added bonus,

this release is compatible with OUYA, however there’s still a lot of user experience details that need to be fine tuned for better feedback on non-touch screens. Here is the full changelog: